May 10, 2012
The Northern Bank name is disappearing from Northern Irish banking after nearly 188 years (click here for details).  The bank is being rebranded as 'Danske Bank', the Danish bank which has owned the Northern Bank since 2005.  The Northern Bank, made infamous by the 2004 heist, was where I opened my first bank account, and my family have banked with the Northern for several generations.  I am therefore sad that the Northern will be no more.

The Northern Banking Company, which evolved out of a Belfast banking partnership, commenced in 1824.  Despite the two other Belfast-based banks merging with large English banks in 1917 (the Ulster Bank was taken over by the Westminster Bank and the Belfast Bank was taken over by the Midland), the Northern remained independent until its 1965 takeover by the Midland Bank.  In 1970, the Belfast Bank and Northern Bank were amalgamated.  The Midland subsequently sold the Northern in 1988 to National Australia Bank.

Why is the Northern name disappearing after all this time?  The answer is simple - the bank has been ravaged by the financial crisis and property collapse.  So much so, that the bank's brandname has been irreparably damaged.  Farewell Northern, hello Danske Bank! 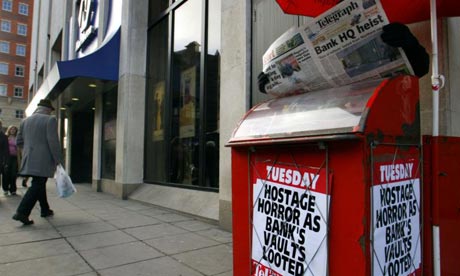