October 14, 2011
In my copious spare time, I am a notaphilist (i.e., a collector of bank notes).  In the not too distant past, individual banks issued their own notes.  However, today, apart from in N. Ireland and Scotland, central banks around the world have a monopoly of the note issue in most economies.  At Feb. 2011, Northern Irish and Scottish banks had a staggering £1,900m and £3,500m of notes in circulation respectively.  As regular travellers across the Irish Sea realise, these notes are not legal tender. 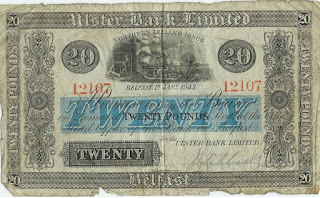 N. Irish and Scottish Banks, however, have to hold backing assets (i.e., Bank of England reserves) to back their note issue.  In other words, for every £1 of notes the Northern Bank has in circulation, it essentially has to hold £1 on deposit at the Bank of England.

Given the costs associated with printing, handling and distributing bank notes, why do banks still issue them?  Prior to legislation passed in 2009, issuing notes was extremely lucrative for banks because they only had to hold backing assets (essentially reserves at the Bank of England) at the weekend, leaving those funds free to generate income during the trading week.  Some estimates suggest that this generated £70m per year for Northern Irish banks alone.  Since the passage of the Banking Act (2009), banks are required to hold backing assets against their note issue at all times.  Backing assets can be made up of Bank of England notes (these notes have a denomination of £1m and £100m, and are known as Giants and Titans) and interest-bearing accounts at the Bank of England.

An additional reason as to why banks issue their own notes is that bank notes can be viewed as a form of advertising - flyers if you like.  I would love some of these flyers under my wiper blades or through my letterbox, especially if they were Giants or Titans!