December 02, 2011
I have recently finished reading Paul Johnson's Making the Market: Victorian Origins of Corporate Capitalism.  It is an extremely well written, enlightening and perceptive book.  Johnson makes excellent use of pivotal anecdotes to get his point across.

The basic point of the book is that to understand corporate capitalism (i.e., an economic system dominated by companies), we need to go back to the origin - the era in which the modern corporation was developed.  Johnson argues that the judicial and political development of both corporate personality and limited liability ultimately resulted in an abdication of directorial responsibility.  This resulted in a moral ambiguity which was ultimately accepted by Victorian society.

Johnson (p.233) concludes his book by reminding us that the 'market' is a 'human construct of intriguing complexity and constant change' and that the 'reluctance of economists..... to recognise and embrace this messy complexity has done little to detract from the long-term rise of economics as a formalistic social science'.  The ongoing financial crisis demonstrates how little economists really know about the 'market' and corporate capitalism. 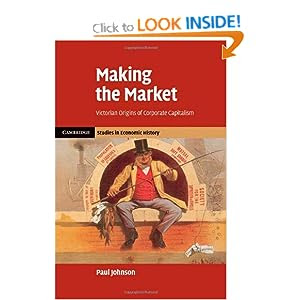