Wealth Inequality in the Roman Empire

December 20, 2011
Walter Schiedel and Steven Friesen, two historians of the Roman Empire, have recently attempted to estimate wealth inequality in the Roman Empire when it was at its zenith using papyri ledgers, previous scholarly estimates, imperial edicts, and Biblical passages.  Schiedel and Friesen estimate that in 150 AD, the top 1% of Roman society controlled 16% of the wealth, less than half of what America’s top 1% control today!  It is also much lower than wealth concentration in N. Ireland - according to the estimate in my recent OEP article, the top 1% of population back in 2001 controlled 22% of the wealth.  I have no doubt that that figure is much higher for 2011.  You can read more about Schiedel and Friesen's work here. 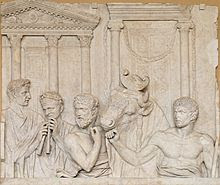