Law and Finance: Why is Common Law Superior?

July 23, 2013
In yesterday's post, I outlined the legal-origin or law-and-finance hypothesis, which argues that economies with a common-law legal origin have better financial development, investor protection laws, etc.. But why is common law better than civil law?

According to the legal-origin school, Civil law is viewed as inferior to common law because it is devised by academics and legal philosophers, whereas common law emerges from the process of judges resolving specific and real business disputes in a pragmatic manner. The infrequent revisions of civil-law codes means that they can quickly go out of date, whereas the common law can easily respond to new business environments and practices. Civil law is also subject to greater interference from politicians than common law.
But why did differences emerge between English common law and French civil law? According to the legal-origin school, there are two possible explanations. One explanation is that during the bloodless Glorious Revolution in England, lawyers were on the winning side, whereas in France, they were on the losing side. As a result, there was no judicial independence in France and government administration was expanded to cope with social problems. The second explanation is that differences between the two legal systems emerged in the medieval era. Whilst England was relatively peaceful in the medieval era, France faced both internal and external threats. As a result, dispute resolution was decentralized in England (with local juries and magistrates), whereas state-employed judges resolved disputes in France. 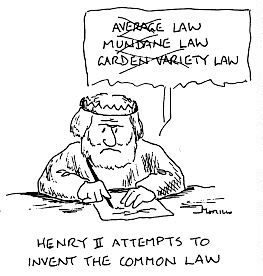