May 03, 2012
Sir Mervyn King gave a speech live on Radio 4 yesterday evening.  You can listen to it or read the transcript here.  This was the first peacetime talk on radio by a Governor of the Bank of England since Montagu Norman's 1939 talk on the Great Depression.


King admitted that the Bank of England could have done more to prevent the recent banking crisis.  In his speech, he stated that "with the benefit of hindsight, we should have shouted from the rooftops that a system had been built in which banks were too important to fail, that banks had grown too quickly and borrowed too much, and that so-called 'light-touch' regulation hadn't prevented any of this."  As someone who has studied Norman's papers at the Bank of England, I suspect that if he had been Governor in the run up to 2008, he would have done more to prevent the crisis occurring.  However, it is probably harsh to criticise King on this point as he was simply operating within the new institutional framework imposed by Gordon Brown and New Labour in 1997.  The question for me, however, is whether the crisis would have been as severe had the institutional framework not changed in 1997.


King also argued that banks need to hold more capital in future because it prevents banks taking excessive risks.  I agree that capital is important in constraining bank risk-taking, but I think that we need to go further and have banks hold contingent capital, whereby shareholders face calls on their wealth if banks run out of capital.  Incidentally, the Chancellor was yesterday resisting attempts by other EU economies to weaken the Basel III capital adequacy proposals (click here). 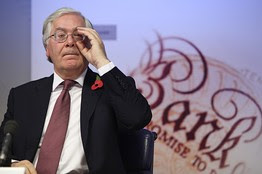